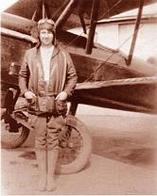 My Grandma, Esther Norbert Warner — later known to me as Betty Cleveland (or Grandma) was my father’s mother and she could fly!  In this favorite family photo, she stands tall at age 16, one of the first licensed female pilots in the State of California and certainly the youngest when she earned her wings.  Imagine how much of a renegade she was in her day!

Years ago, the family collected her goggles, flight boots, that cool jacket and other memorabilia as a donation to the new Museum of Flight being developed at the College of Pacific.  I believe that institution was the pioneer in flight training in the early period of the age of flight and that’s also where my Grandma and other relatives got their wings.  The School, flight historians and others in California have taken up a project to make this part of flight history come to life.

In 2009 when I moved into my office at Hobby-Lobby International, Inc. (now Hobby Express) this was the mysterious photo I hung on the wall.  I should not have been surprised when the staff overlooked my grandma at the center of the photograph, and asked me what I knew about the air plane.  I was stumped!

Honestly, I had no idea what she flew until my great Aunt Marj broke the story… not one other person has ever had the answer until then: you’re looking at an Alexander Eaglerock.

For all you flight historians, this aircraft was used in the College of Pacific Flight Training School where my Grandma took flying lessons from her uncle, the school’s only instructor.  I still think it would be a blast to introduce this airplane, something with a family tie, as one of our new Pilot-1 Golden Age Civilian series.   That’s in the skunk works now!

This bi-plane reportedly flew like a dream. The one pictured was crashed a few times and rebuilt. At Hobby Express we look for “under-modeled” airplanes because, at least it seems to me, everyone is copying everyone.  We want to deliver quality, but also something really different and interesting you WANT to bring to the local R/C flying field.

I just wish I could go back in time and watch my Grandma fly!