Growing up in Eugene, there was only one professional team to follow in Oregon – the Portland Trail Blazers.  In 1976, the year they won the NBA title, fans poured into the streets like it was Mardi Gras.  I recall the entire city of Portland celebrating with the players. 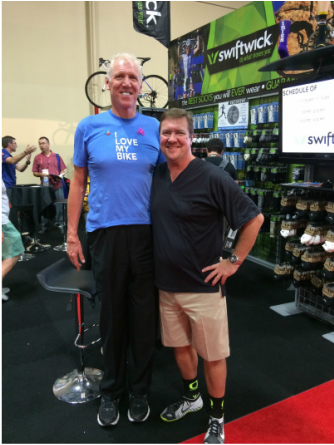 Bill Walton was a center piece on that team (no pun intended).  A phenomenon at UCLA in their legendary championship run, he was famous for following his unique path.  The player hippie, someone a west coast fan base could easily identify with.  Over his great career, he was inducted into the Hall of Fame, recognized as a league MVP and played a key role for the Celtics in Boston’s their Championship days — his enthusiasm and competitive nature remain electric to this day.  Bill’s medical challenges are widely known, from ankle fusions to back surgery, but it’s how he persevered through it all that has always been awe inspiring to me.

When we developed the VALOR amputee sock at Swiftwick, our paths crossed and soon, our compression socks were his favorite.  Compression socks are important, and much more so, to a seven foot tall guy with size 16 shoes and fused ankles.   It’s wonderful to be able to help people, but if you are a fan of someone who later becomes “your fan” the story will wind up in your blog… Today, I consider Bill a friend and enjoy talking on the phone as we stay in touch.
Ultimately, the team at Swiftwick made a special edition Swiftwick XXL sock, just for Bill. Check out the comparison photo, with his custom sock dwarfing the standard XL size.  At his request, I coordinated the development of a made to fit cycling shoe cover.  They were proudly hand crafted in the USA, just for Bill. 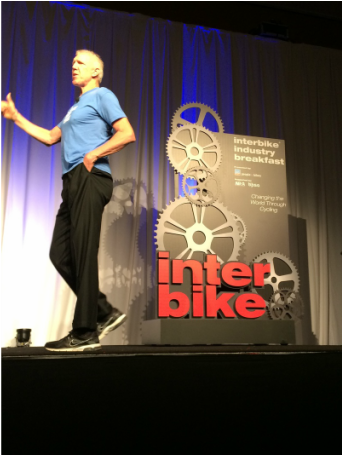 That’s where Robert Sandoval from Bike Sport Radio caught up to Bill to capture this brief interview. Of course, I appreciate his positive and kind words — and can’t help but blush — however, I also know that he feels this way and expresses love for other people that he considers friends.  BIll says “..I forgot to listen to the music..” when reflecting on his more arduous and painful moments on the path to recovering his health.

Music is the language of healing, but equally as important is positive thinking.  You can’t help but love the positive language that Bill uses in every exchange with his friends.  I’m honored to be counted among his friends.   Bill loves his bike.  He has two (REALLY BIG) custom made bikes that are themselves, works of art.  His contributions to charity are often centered around long distance fund raising rides.

A few of my favorite memories come from a few days I spent as a guest at his house. Just walking around in Bill Walton’s home is like Alice in Wonderland, set in a musical world with athletic memorabilia, art and collectibles celebrating Bob Dylan, JIm Morrison, Bruce — and of course, the Grateful Dead.  The two of us lifted weights in his garage and talked about business, cycling, health, philosophy and music.   We enjoyed lunch with a group of very smart guys looking to be disruptive in the prosthetic business.  It felt like I was his wing man that day, supporting of the entrepreneurial ecosystem in San Diego.  We drank Tequila in his tee pee (yes, a full size, permanently installed, classic plains indian style tee pee).  His home felt like home. 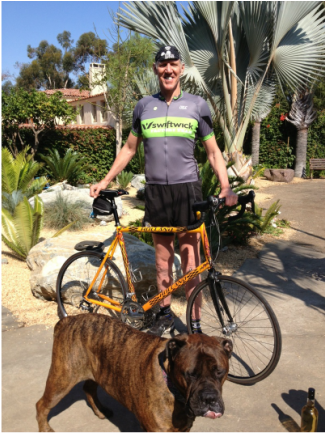 When I started to compile notes for a book that’s inside me (but can’t get out) his coaching was invaluable. He contributed my first interview, the content of that amazing conversation still on my hard drive.  During his visits to Nashville or mine to San Diego, we’ve found time to get together.  Bill was the featured speaker to open the Interbike 2014 trade show.  He came to our booth for a couple hours to talk with Swiftwick dealers and caused quite a stir. 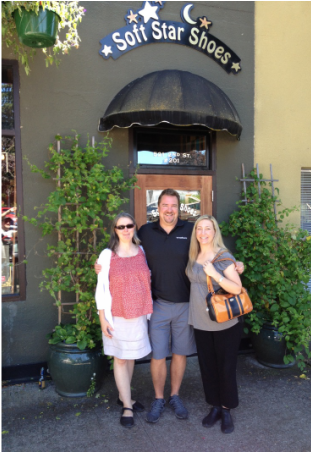 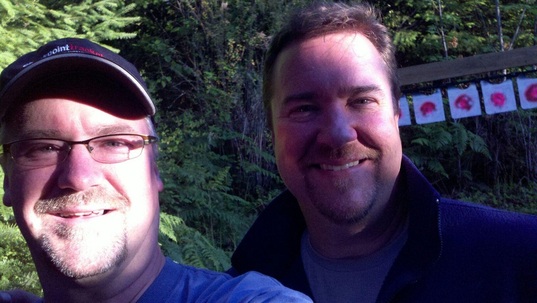 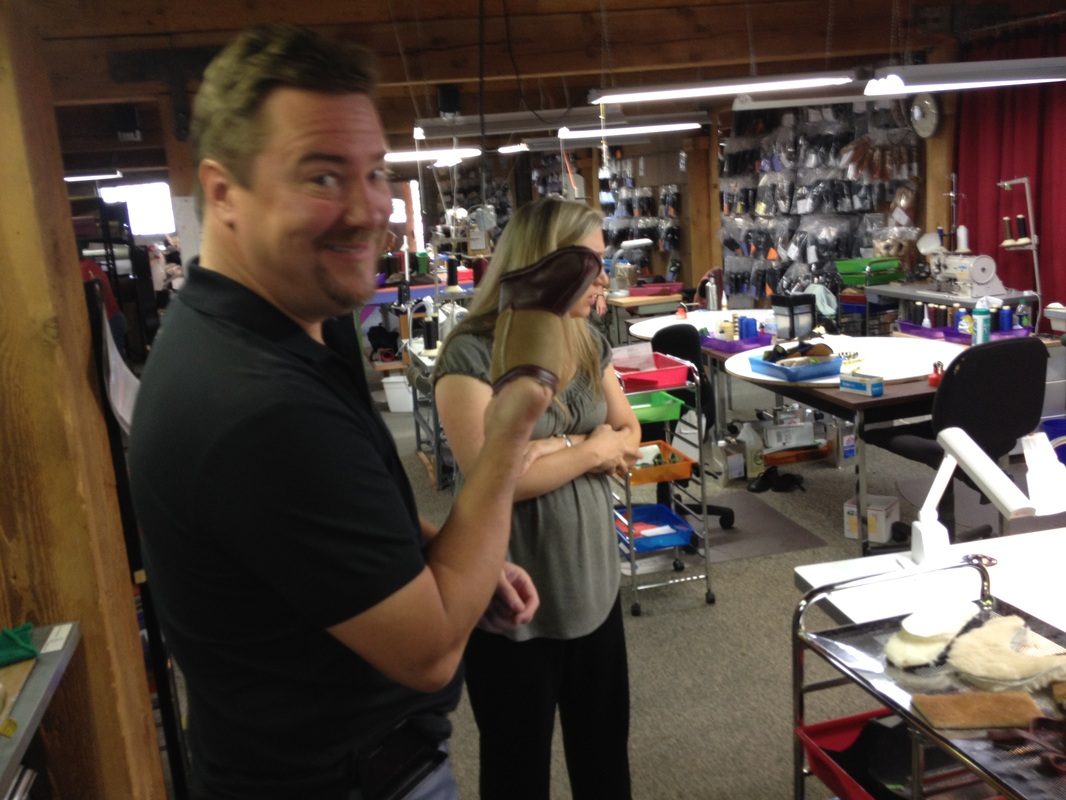 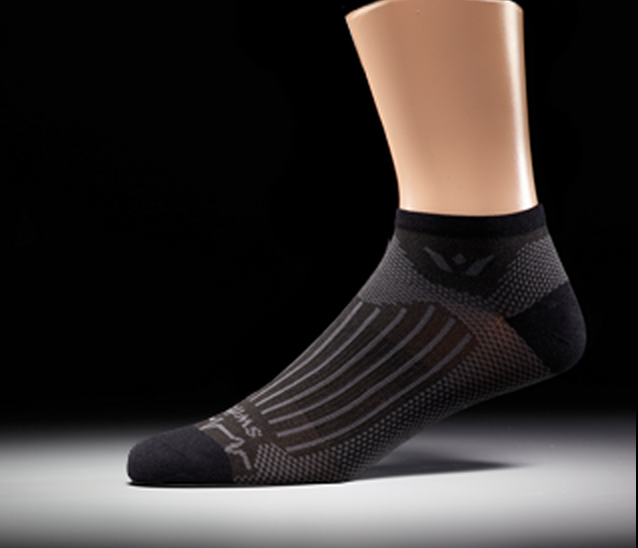 Going to the Olympic Trials is an adventure.  My adventure included visiting old friends, touring all the impressive facilities at the University of Oregon, and stealing away to Corvallis during the break to visit my brother, Kurt.  We were both at the U of O for a while, but he finished up at Oregon State, just up the road.

As an engineer, he just “geeks” over any opportunity to solve a problem.  I love to hang with Kurt.  He has great ideas and high quality friends, including Trish and Larkin – the amazing and capable ladies who own and operate Soft Star Shoes in Corvallis Oregon.  Just imagine four people committed to manufacturing quality shoes and socks, right here in America, having a “group geek” all day over the many related marketing, selling and operational challenges we face.  That’s a great day in sunny Oregon!

Manufacturing in America is important.  Consumers are increasingly driving their choices and preferences for American made products into their everyday lives.  They have power because they know more about the products they buy and they care where they are made.  I appreciate those who want to tour our production facility or visit our office, but on this day, the “shoe was on the other foot” — (I love that I got to work that into my blog). So here I am, on my adventure in Oregon, where I get to tour a shoe factory.  A shoe factory which is – of all things — not in Asia.  It was inspiring.  I learned about “clicking” which is the process of cutting out a design in leather, and I observed some processes that have not changed much in, well, centuries.  It was like watching Geppetto at work in his shop.  Everyone there makes a unique contribution to an age old process.  The rough hewn log beams and heavy flooring of their turn of the century building offer a warm atmosphere.

Soft Star upgraded the building to achieve their green ideals.  They recycle heat from waste water, and it’s a kid friendly work place to boot.  These are interesting people who hand craft stunningly beautiful shoes.  It was, as Trish would casually say, “…a bit primitive…” which might be true, insofar as it was not a highly automated facility, but it was certainly highly practical and absolutely fascinating.  It may be primitive, but that’s the point.

Swiftwick shares a customer base, like the minimalist runner, environmentally sensitive consumers looking for companies that reflect their values.  Our shared customers are parents who believe they have found the perfect shoe, the toe seam free sock that doesn’t stink…  Soft Star connects with people who want a vegan shoe, which got me thinking about how our synthetic socks are vegan too.

Swiftwick made a splash at the trials with our ultra-light, ultra-thin minimalist sock — the PULSE.  So many distance runners from the 1500 to greater distances, including the steeple chase, have been giving us their product feedback and support.

To be there to cheer them on made me feel like a proud parent.  Now, I’m thinking about how a partnership between Soft Star and Swiftwick might develop into something else to be proud  of.